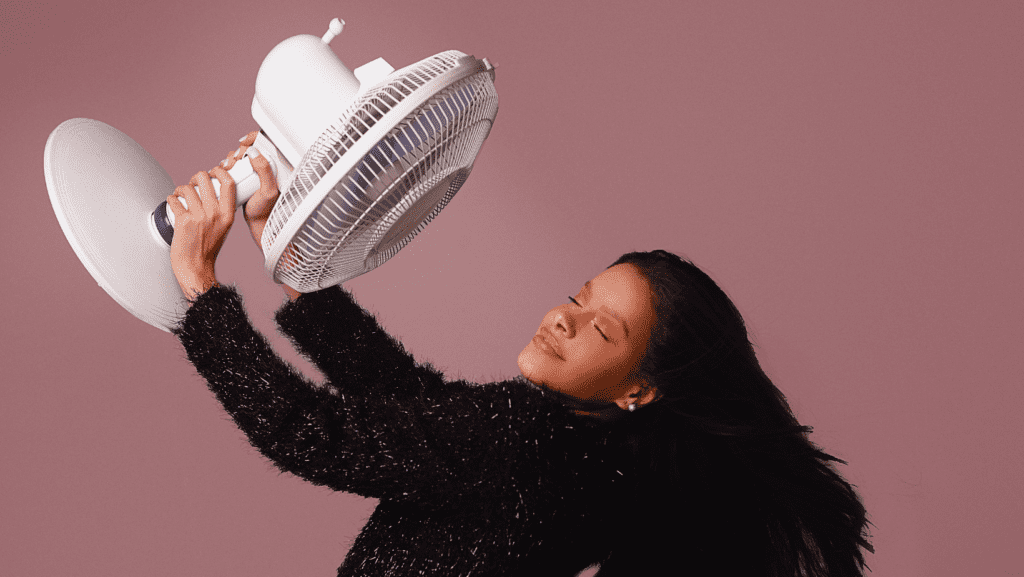 Electrical fires are a common occurrence not just in commercial spaces but in residential areas too.

Research carried out by the Electrical Safety Foundation International reveals that over 50,000 electrical house fires happen each year.

To avoid becoming a victim, ensure you handle all your electrical appliances with care, especially fans. If you’re like most homeowners, you probably don’t consider fans risky.

But the truth is, they’re just as dangerous as other appliances.

So in the following post, we’ll be answering the question, “can electric fans catch fire?” We’ll address other questions you might have in relation to this too.

Table of Contents
Can fans cause electrical fires?
How does an electric fan start a fire?
An overheating motor
Short-circuit the cord or switch
How common are electric fan fires?
Can electric fans be left on 24 hours a day?
How to prevent electric fan fire
Putting your fan in a safe location
Replacing your fan every 8 years
Turning off the fan when you leave home
Using proper extension cables
Buying a good quality fan
Wrap Up

Can fans cause electrical fires?

The short answer to this is a resounding yes. If this appliance isn’t handled with care, it can ignite a fire. This brings us to our next point.

How does an electric fan start a fire?

There are a couple of reasons that can cause fans to start electrical fires. The most common are:

If you’ve ever heard of a fire incidence that was caused by an electric fan, the most likely culprit is the fan motor.

If the motor is defective, then it can stall and begin to overheat. When this happens, excessive heat can melt the plastic components, resulting in them catching fire.

Another factor that can cause the motor to overheat is if the blades stop spinning. This can result from an external issue, such as obstacles like clothing or curtains getting trapped in the blades.

Question is, how do you know whether the fan motors are overheating or not? Oftentimes, there’ll be a burning smell indicating that there’s something wrong with the fan.

Short-circuit the cord or switch

If the extension cords or switch wires are faulty from the get-go, then there’s a higher likelihood that they’ll short circuit and ignite a fire.

Another mistake that homeowners make is attempting to replace the cord by themselves. What they fail to realize is that installing the cord incorrectly can easily create a fire hazard.

Yet another risk that exists is the oscillating blades of the fan accidentally rubbing on the cord. If this happens, the insulating material can be torn down, leaving the wires widely exposed.

How common are electric fan fires?

Electric fires are very common, but they aren’t necessarily caused by fans.

A study done by the National Fire Prevention Association reveals that electrical appliances are the second most common cause of fires, right after unattended equipment.

Appliances that aren’t correctly installed as well as wiring issues can lead to arcing and sparking, which then cause a house fire.

The majority of these incidents occur in winter when homeowners are most likely to use appliances that relate to a heat source.

For maximum safety, always double-check your electrical appliances. Ensure that all the components of your fan – especially the motors- are working optimally.

Another important thing to do is hire a professional electrician to do installation and repairs. Such an expert knows how to install all types of fans; be it a box fan or ceiling fan.

They also know how to handle circuit breakers and wiring when performing repairs.

Can electric fans be left on 24 hours a day?

Generally speaking, electric fans can be left on 24/7. But it’s not advisable to do so, especially if you’ll be away for most of the day.

Still, some people like to leave their fans on at night for the following reasons:

Although these reasons are justifiable, the risks of leaving a fan on 24/7 far outweigh the benefits they offer.

In fact, some individuals should never leave their fans running at night. Specifically, if you’re feeling unwell or suffer from allergies, then it’s advisable to turn it off at night.

For individuals prone to allergies, the fan may end up circulating dust and pollen that triggers an allergic reaction.

For sickly homeowners, the circulation of air can dry out your nose, mouth, and throat. This can, in turn, exacerbate the symptoms you were already experiencing.

Regardless of whether you’re sick or not, we don’t recommend leaving your fan on at night because it’s a fire hazard.

So if a problem were to occur while you’re sleeping, you’d not notice it in time to address it. This means that if the box or ceiling fans catch fire, you’ll be vulnerable to smoke inhalation.

Thus, the best thing is to consider alternative methods to stay cool; be it during the day or night. Here are a few recommendations:

How to prevent electric fan fire

There are a couple of things you can do to ensure your fan never sparks a fire. These include:

Putting your fan in a safe location

During the hot, summer season, you likely carry your fan with you to different places, especially if it’s a portable one. However, you’ll want to be mindful about the specific place where you’re placing your fan.

For starters, ensure that you never put your fan on a carpeted surface. Most carpets are highly-combustible.

This means that if a fire was to start, it would spread incredibly fast on the carpet.

Even if you place the fan in a non-carpeted area, you’ll want to ensure that there aren’t any clothes nearby. Like a carpet, clothing items can also catch and spread fire very fast.

Most homeowners prefer positioning their fan on a window sill. While effective, you’ll want to keep the fan at a safe distance from nearby curtains and blinds.

Doing so is necessary to prevent them from getting caught on the fast-spinning blades. If they do get caught, the blades will stall, causing the fan to overheat.

This chain of events would then ignite a fire that spreads through the curtain fabric.

Finally, be sure to place your fan in a spot where it can’t fall.

For instance, if you’re using an electric desk fan, then don’t place it at the very edge of the table. If the fan topples over, the hardware can get wrecked and cause one of the parts to short circuit.

Replacing your fan every 8 years

On average, a fan can last anywhere between 6 and 10 years. To err on the side of caution, we recommend replacing your fan every 8 years.

This is because the majority of fire incidents reported, occur to fans that are less than 10 years old.

And while you’re purchasing a new one, remember that each fan is designed in its own unique way. So don’t assume that its components or installation process is the same as your previous one.

Rather, read the owner’s manual and take note of the warranty and the recommended life expectancy. So if the manufacturer suggests using the fan for just 6 years, don’t exceed this threshold.

Turning off the fan when you leave home

Some homeowners leave their fans on, hoping that they’ll come home to a cool environment. What they don’t realize is that fans aren’t effective in this way.

Contrary to popular belief, a fan doesn’t work by adding any cool air into a space. Rather, it’s designed to move air around at a faster speed.

It pulls in air from the ground and then pushes down air from the ceiling. The constantly moving air creates a breeze, which then gives you a cooling effect.

What this means is that you have to be present to benefit from the cooling effects of your fan’s operation. If you leave the fan on when you leave home, you’re simply wasting energy.

Did you know that up to 3,300 residential fires are caused by improper installation and use of extension cords?

This goes to show just how careful you should be when using an extension cable with your electric fan.

Even if you have some basic knowledge on how to go about it, consider watching this video that provides a more comprehensive guide.

Considering that there are a couple of things that can go wrong with a fan, it’s crucial that you invest in a premium-quality model from the start.

Buy from a reputable brand, and ensure you’re getting one that’s suitable for your space. Other factors you should consider are:

If you’ve been wondering whether an electric fan can catch fire, the answer is yes, it can.

A faulty, overheated motor or short-circuit of the switch or cord can cause the plastic elements of the fan to ignite.

The good news is that there are several things you can do to prevent this. First off, turn on the fan only when you’re around. This way, you can identify faults early on and turn off the fan if necessary.

Secondly, be mindful of where you place the electric fan.

Similarly, invest in a high-quality fan from the get-go and use the correct extension cables. It’s also good practice to replace your electric fan every 8 years.

Finally, if you’re planning to install or fix an electric fan in your house, leave this task to a licensed electrician.

This individual has all the experience and knowledge to undertake this task correctly and safely.

NOTE FROM the author

It's a pleasure to have you here! We've written helpful information on all things that make your home so very special.

If you really enjoyed this article, please feel free to check out the entire website. I'm super excited to share more content to help you unleash your home!

We are a participant in the Amazon Services LLC Associates Program, an affiliate advertising program designed to provide a means for us to earn fees by linking to Amazon.com and affiliated sites.